Sensei Kam Arefi holds a 7th Degree Black Belt in Shito-Ryu Karate-Do. He has been selected to serve on the Karate Ontario Technical Committee. Sensei Arefi is an NCCP trained coach and a member of Coaches Association of Ontario, Coaching Association of Canada as well as a member of, Karate Ontario, National Karate Association and president of Shito-Ryu Karate -Do Mushin-Kai International . He was also given the distinctive honour of being selected to represent Shito-Ryu at the Panhellenic Karate-Do Federation Demonstration (Shito-Ryu) because of his superior skills in his respective art. Sensei Arefi was selected for the Shito-Ryu national team in Greece in 1993.

Sensei Kam Arefi began teaching Shito-Ryu to students at Mill Courtland Community Centre upon his arrival to Canada in 1993. He introduced Shito-Ryu to the Kitchener-Waterloo and the entire Golden Triangle area.

While training at the YMCA, Sensei Arefi opened his first Sosai Kan Dojo School for Karate. He has been a volunteer teacher and program organizer at the Kitchener YMCA for over seventeen years. He also taught students at the St. Joseph School in Cambridge. After a successful demonstration at Victoria Park, Kitchener, on Canada Day 1995, he was approached by many people interested in getting more information about martial arts and self-defense.

In 1996 Sensei Arefi opened a second Dojo at 222 King Street East in Kitchener. This enabled him to generate more public interest in his techniques and became very popular at many community centres. He now instructs over 700 students.Many of Sensei Arefi’s students have been awarded “First” and “Second” place in competitions across Canada. His efforts, faith and respect have been rewarded and his students’ success has been a source of great pride. Due to recent expansion of the organization and with the support of members, the decision was made to obtain a new logo. We look forward to the continued growth of Mushin-Kai in Canada and internationally. 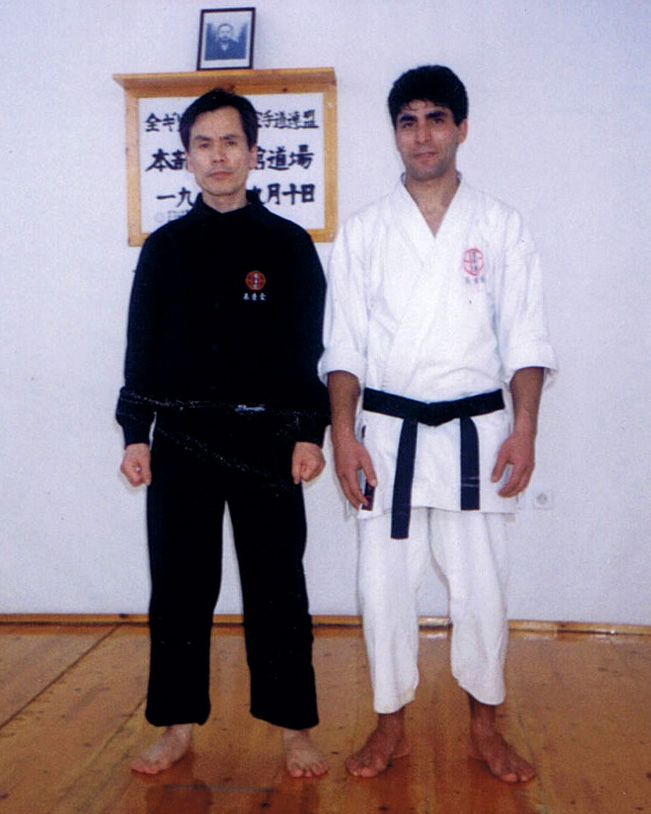 A Message To My Karate students:

The world would be better if youngsters would listen to older individuals with experience and knowledge. Those who use fighting and killing in order to achieve their goals can affect our youth very effectively and negatively. I would tell my students not to let any person or group use you for their own evil purposes. Do not let them play chess with your life, using you as a pawn. You owe it to yourself to be the best representative of humanity by educating yourself in your field of interest. Hold onto the highest degree of honor and dignity in your community, wherever you are. Never give up at any time in your life – persistence pays off. Do not forget, at the end of any dark tunnel, there is a light waiting for you. Once you get there, hold the torch up to the pathway for others to follow.

I have never wished for revenge or destruction; instead I decided to pursue life with a positive force. I chose to educate people through Karate and I am proud of my decision to follow a peaceful, progressive life.

I have gone through many obstacles in my life, but I never gave up and finally I was able to achieve my goal. I find that success and wealth are fulfilling when you are able to share them with others. Perhaps that is what I will leave with the people whose lives I affect.