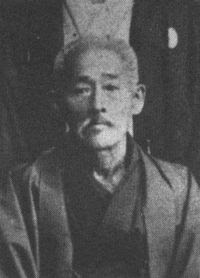 Higaonna Kanryo (March 10, 1853 – December 1916) was a native of Nishi-shin-machi, Naha, Okinawa. He was born into a merchant family, whose business was selling firewood, an expensive commodity in the Ryukyu Islands. He founded the fighting style later to be known as Gojū Ryū Karate.
The characters of his family name are pronounced “Higaonna” in Okinawan, and “Higashionna” in Japanese. In Western articles the two spellings are often used interchangeably. His older relative is Higaonna Kanryu (Kanryu of the East, Kanryo was of the West).
In the early 1860s he began studying the Okinawan martial arts under a teacher named Arakaki Seisho. At that time the word karate was not in common use, and the martial arts were often referred to simply as Te (“hand”), sometimes prefaced by the area of origin, as Naha-te, Shuri-te, or simply Okinawa-te.
In 1869 Kanryo sailed to Fuzhou in the Fukien province of China. He spent at least several years there; accounts range from five to twenty, though the latter seems unlikely. He spent his time studying with various teachers of the Chinese martial arts, the first four years he probably studied with Wai Xinxian, Kojo Tatai and or Iwah at the Kojo Dojo. Kanryo then trained under Ru Ru Ko (a.k.a. Ruru Ko, Ryu Ryu Ko, To Ru Ko, or Lu Lu Ko, his name was never recorded as Kanryo Higaonna was illiterate. His real name was probably Xie Zhongxiang founder of Whooping Crane gongfu). According to oral account, Kanryo spent years doing household chores for master Ru Ru Ko, until he saved his daughter from drowning during a heavy flood and begged the master to teach Kung-fu as a reward.
In the 1880s Kanryo returned to Okinawa and continued the family business. He also began to teach the martial arts in and around Naha. His style was distinguished by its integration of both go-no (hard) and ju-no (soft) techniques in one system. He became so prominent that the name “Naha-te” became identified with Higaonna Kanryo”s system.
Kanryo was noted for his powerful Sanchin kata, or form. Students reported that the wooden floor would be hot from the gripping of his feet.
Several of Kanryo”s students went on to become influential masters of what came to be called karate, amongst them Chōjun Miyagi, Kenwa Mabuni, Kyoda Shigehatsu, Koki Shiroma, Higa Seiko, and Shiroma Shinpan (Gusukuma).